Hon. Agnes Kunihira said that the current Employment Act of 2006 is wanting in terms of clauses that protect breast-feeding mothers, casual labourers and migrant employees. 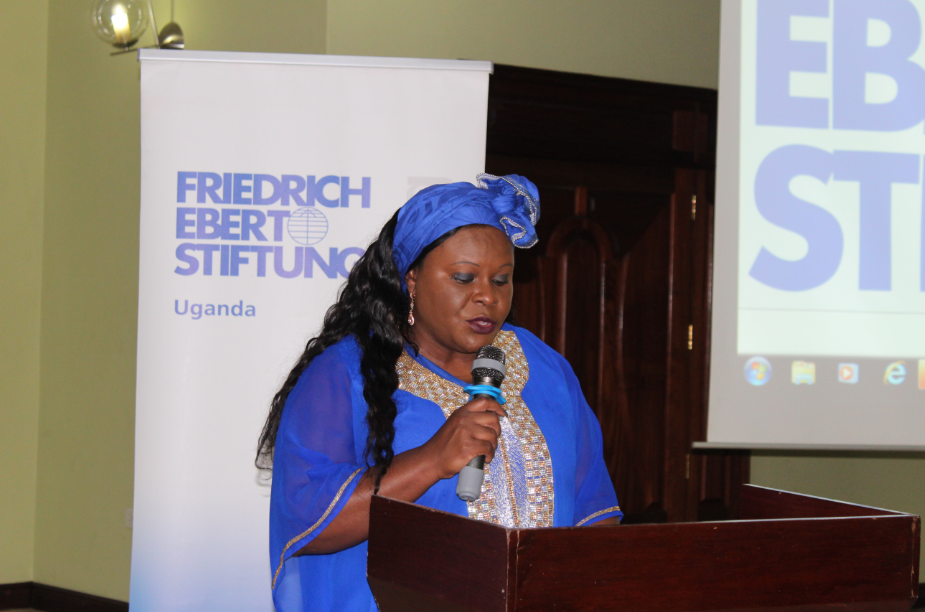 On the 16th May 2019, Friedrich-Ebert-Stiftung (FES) Uganda in partnership with the Members of Parliament (MPs) representing workers organised a one (1) day consultative meeting on the Employment (Amendment) Bill 2019 at Imperial Royale Hotel, Kampala. The purpose of the event was to provide a platform for workers in both formal and informal economy to give their input into the proposed private members’ Bill.

In March 2019, Workers’ MPs secured leave of the Parliament to introduce amendments to the Employment Act 2006 with aim of improving the working conditions for workers in Uganda. The Private Members’ Bill titled “The Employment (Amendment) Bill 2019” is spearheaded by Workers MP, Hon. Agnes Kunihira.

In her welcoming remarks, Hon. Agnes Kunihira said that the current Employment Act of 2006 is wanting in terms of clauses that protect breast-feeding mothers, casual labourers and migrant employees. Despite being a signatory to many international conventions relating to labour, Uganda’s current labour laws do not address the labour challenges and their harmonisation is still lacking. According to Hon. Agnes, the bill seeks to protect workers especially casual and domestic workers from various forms of abuse and exploitation such as denied decent wages, social security, working under unhealthy conditions and sexually abused especially women.

While giving his remarks, Mr. Usher Wilson Owere, the Chairman General of National Organisation of Trade Unions (NOTU) welcomed the initiative by the MPs representing workers to amend the Employment Act of 2006. This move will reduce on the rampant exploitation of workers in Uganda. He informed the participants that trade unions are ready to work very closely with Workers’ MPs to accomplish the Private Members’ Bill on Employment (Amendment) Bill 2019.

Ms. Rosa Malango, UN Resident Coordinator in Uganda, in her opening remarks said that the amendment of the employment bill for her is about values, and rights that will benefit workers, bring dignity to families and to those who contribute to Uganda’s inclusive economic growth and prosperity. The UN Resident Coordinator said that without a strong labour justice system, Uganda will not attain the aspirations of the Uganda Vision 2040 and the National Development Plan II. She urged the government of Uganda to consider the challenges with the current Employment Act of 2006. Some of these challenges include; issues of coordination in labour administration, the excessive powers given to the labour officers which is prone to abuse, inadequate provisions on recruitment, inadequate reporting requirements, limited remedial actions, and the need to regulate the employment of domestic workers. In her conclusion, Ms. Rosa Malango said that the amendment of the employment bill will enable Uganda to achieve the Sustainable Development Goals in Uganda especially Goal 8 and the target on full and productive employment and decent work for all women and men, including young people and persons with disabilities and equal pay for work of equal value.

During the presentation of the draft bill, workers submitted a number of proposals to incorporate into the amendment bill. These included – re-defining the following terms workers, work place, contract of service, and terminal benefits. Other proposals were - establishment of institute committees instead of reporting cases directly to labour officers, trade union leaders working with labour officers to enforce the Act, introducing avenues for appeals when a recruitment license has been cancelled by the issuing officer, trade unions organising migrant workers, increasing paternity leave, need to harmonise the maternity leave and breast feeding days, inclusion of the informal economy workers in the amendments, amendments should look beyond domestic workers and casual labourers, need to legislate employment of volunteers, among others.

In his closing remarks, Mr. Milton Turyareeba, chairperson of Central Organisation of Free Trade Unions (COFTU) appreciated the Members of Parliament representing workers for requesting the Parliament to amend the current Employment Act of 2006. Mr. Turyareeba said that the initiative to amend the Employment Act of 2006 is overdue because workers face numerous challenges like the low salary payments, lack of minimum wage, lack of infrastructure for workers with disabilities, and sexual harassment.  He suggested the need to increase on the number of MPs representing workers, salary enhancement for public servants in the national budget, protection of workers’ rights including the migrant workers, fast tracking minimum wage Bill, recognisation of domestic and informal economy workers in the Employment legal frameworks.