Currently, a review of the National Industrialization Policy is being undertaken. As a watchdog for industrialists, the Uganda Manufacturers Association (UMA) has been a focal association in consultation with government and other private sector players to review the industrial policy that expired in 2015. In the same light, the Uganda Manufacturers Association in partnership with Friedrich Ebert Foundation (FES) held a seminar on 29 June 2018 under the theme: “Promoting Industrial Policies and Quality Standards that Foster Competitiveness and Economic Development in Uganda.” 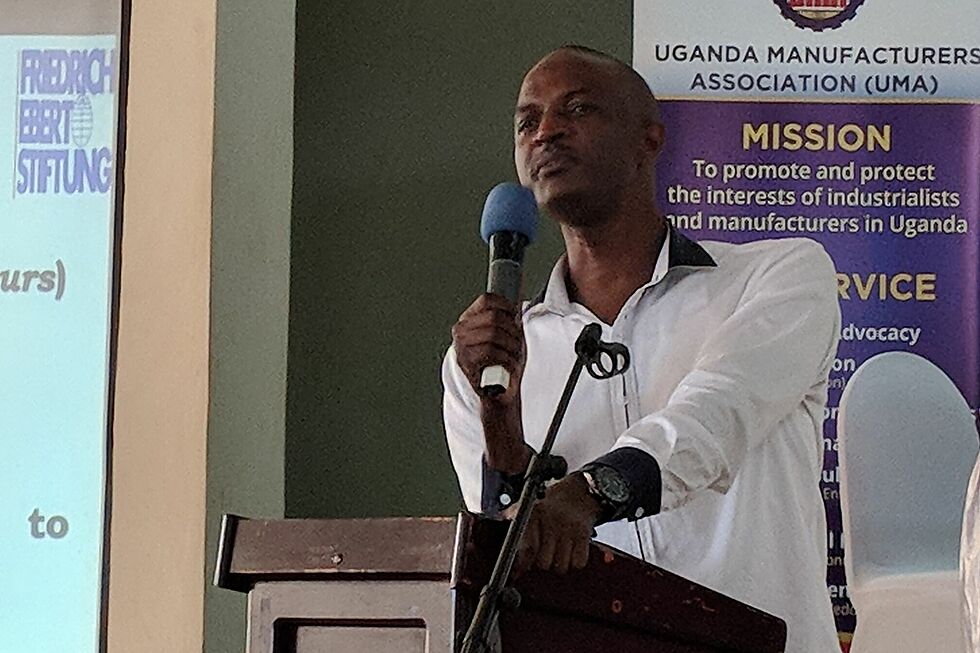 The aim of the seminar was to identify key pain points of industry players whose remedy would be through influencing the national policy agenda. Through presentations from experts, the state of the current industrial policy was discussed and measures to make it better were pointed out.

Among them was Ramathan Ggoobi, an economist who noted that the policy which is under review was haphazardly implemented and explains why it has had no impact: “We wanted to increase the percentage contribution of manufacturing to the GDP to 25% but we are currently at 8.4%. He further called upon the private sector to reject the new industrial policy, which is still under review, if it is emphasizing agro-processing and not manufacturing.

Professor Julius Kiiza, a political scientists at Makerere University in his presentation, noted that Uganda liberalized imports prematurely and that this has been constraining the industrialists from growing. He also dismissed the notion that Uganda is a private sector led economy saying that it is only an illusion: “If you want the private sector to be in the driving seat, you must build it first.” He called for the provision of the necessary government-support to enable it to grow. Some banks must be state-owned to enable the private sector access to affordable credit. He noted that interests of over 20 per cent do not make industrialists competitive. “The government is the biggest borrower from commercial banks; how can a parasitic state be the biggest customer of commercial banks - and not industrialists - and you still claim this is a private-sector led economy?”

Daniel Birungi, the Executive director of UMA acknowledged that more effort is needed to build a strong and vibrant manufacturing sector in the country. He noted that as today’s businesses seek out new avenues of being competitive, there’s need for a supporting national industrial policy that would not only drive growth but also ensure survival in a volatile market; hence the relevance of engaging members in their respective sectors to have input towards the review of the industrial policy.

With effect from 1 July 2018, all manufacturers will be required to have a Q mark of their products. Ronald Ahimbisibwe, the Principle Certification Officer, Uganda National Bureau of Standards (UNBS) noted that the mandatory standard was established through consultation and engagement of experts within their field of operation, for example manufacturers, academicians, consumer groups, traders, exporters, importers among others. A standard therefore represents consensus on based on best practices. To enable competitiveness in the market, UNBS undertakes conformity assessment to determine the relevant requirements of standardization which are both promotional and regulatory. It promotes and facilitates the adoption and use of standardization services to enhance the quality and competitiveness of locally manufactured products and enforces standards to protect consumers and ensure fairness in trade. Moreover, is helpful in defining quality, required for product certification, used in public procurement used as a marketing tool (“my products conform to the national standards”), called upon in legislation referred to in contracts and basis for quality and environment management (ISO 9000 & ISO 14000).