Ramathan Ggoobi, an economist explained that a transformative budget needs to invest in sectors that encourage structural change towards higher productivity sectors and jobs 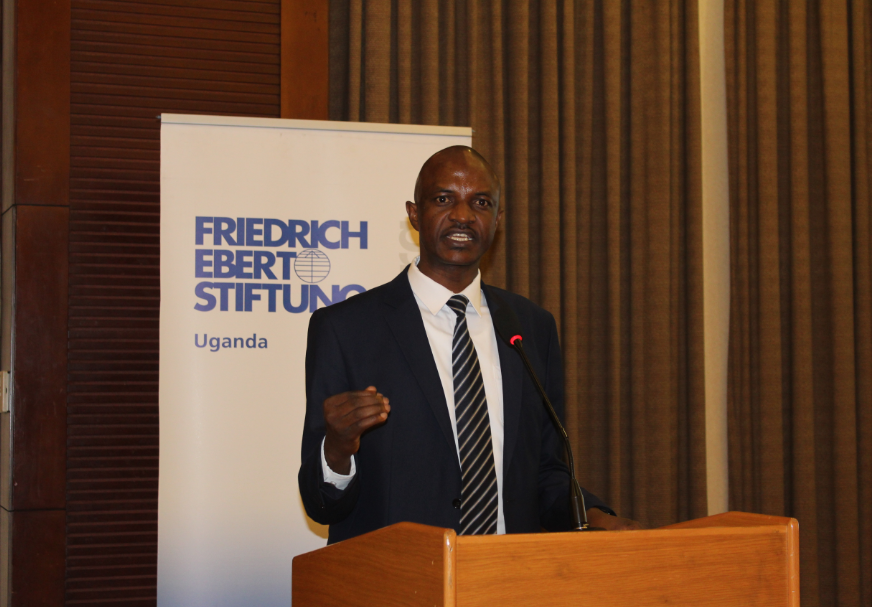 Uganda has experienced positive economic growth with fluctuations over the past years. However, the country’s biggest policy challenge has been lack of economic transformation characterised by a shift in the GDP share from agriculture to industry and services.  The budget is a policy tool that plays a key role in facilitating economic transformation and social inclusion.

A number of stakeholders are optimistic about the 2019/20 national budget themed “Industrialisation for Job Creation and Shared Prosperity” and question whether it will trigger economic transformation and social inclusion. Their observations indicate that this budget is not structured to directly respond to challenges encountered by the majority of Ugandans.

In his presentation, Ramathan Ggoobi, an economist explained that a transformative budget needs to invest in sectors that encourage structural change towards higher productivity sectors and jobs; invest in technological upgrading to achieve productivity growth within sectors;  employs industrial policy that takes explicit account of job quality, quantity and access; invests in improved education quality and training;  invests in social protection interventions and increases access for vulnerable and marginalised persons to economic opportunities. He added that budget should be socially inclusive by considering - access to opportunities, health, education and gender equality. Ramathan said that proper economic transformation should be from agriculture to industries and not services as it is currently the case in Uganda.

During the panel and plenary discussion, Dr. Fred Muhumuza said that the ruling political elites and the President have more influence on the budget allocations whereas the rest of the citizens are bystanders. He added that citizens come off as a distant group who, quite often, simply have to wait for their fate in the budget to be determined by other parties (MDAs and private sector contractors working for government, elites groups outside government, development partners and CSOs including a limited group of academia).  He also mentioned that the focus of the national budget has shifted away from growth sectors in operational terms even though the strategic focus appears to be on growth. The interests of the ruling political elite have changed towards security away from social services. The continued bias towards infrastructure investment has also undermined allocations to other relevant sectors in the economy.

Similarly, Hon. Stephen Mukitale said that the Parliament of Uganda as a stakeholder in the budgeting process is responsible for checking whether the national budget is aligned to the National Development Plan and the Uganda Vision 2040. However, he doubted if the current budget will transform the economy given the fact that almost 25% is allocated to public debt servicing. He recommended that there is need for more funds allocated to the sectors such as education especially the technical and vocational institutions. He further requested the government of Uganda to fast track the rationalisation of ministries, departments and agencies to save on the funds and have them allocated into sectors that will transform the economy.

Furthermore, Agnes Kirabo, Executive director of Food Alliance Rights (FRAs) and a member of Civil Society Budget Advocacy Group (CSBAG) said that their space of engagement on the budget is shrinking nowadays with the parliamentarians and government institutions claiming that there is no time to debate about the budget allocations. This in one way or the other has left out key proritises that are very relevant for promoting economic transformation and social inclusion in Uganda.

Dr. Patrick Birungi, the new Executive Director of Uganda Development Corporation (UDC) indicated that planning is easier than implementation of government programmes. He urged the different government institutions to identify programmes that are transformative and inclusive in nature. Dr. Birungi said that economic transformation will only occur if budgeting goes into enhancing productivity of citizens in the country.

Mr. Kenneth Mugambe, the director of budget with Ministry of Finance, Planning and Economic Development called upon the stakeholders to critically analysis the 2019/2020 national budget. Kenneth explained to participants the budgeting process, its challenges and how the 2019/2020 budget will transform the country both economically and socially. He highlighted some of the transformative and inclusive priorities that include infrastructural development, agro-industrialisation, and investment in both social services (i.e. health and education), and social protection interventions like Social Assistance Grant for Empowerment (SAGE) under the Ministry of Gender, Labour and Social Development (MGLSD). Kenneth further called upon stakeholders such as Civil Society Budget Advocacy Group (CSBAG) to engage citizens more on the budgets to be more informed on the process and the allocations. He appreciated the government with support from development partners for providing citizens with timely and accurate information on budgets. This has been done using various channels such as online platform - https://budget.go.ug/ and quarterly press releases which have made budgets transparent.

The event was officially closed by Mr. Vincent B. Tumusiime, the Director of Social-Economic Monitoring and Research with the Office of the President who called upon the government to find solutions for challenges hindering the transformation of the economy. For example, issues of debt unsustainability, land ownership vs. infrastructural development, inadequate capacities, lack of coordination within and among the different ministries, departments and agencies. He strongly urged Uganda Development Corporation to focus on its mandate that will transform the economy.