KOTSA members expressed their interest in understanding the national safety and health programmes that they can benefit from to address some of the decent work issues, starting social protection initiatives for themselves and empowerment of women in the taxi industry to increase their visibility and services they can offer. 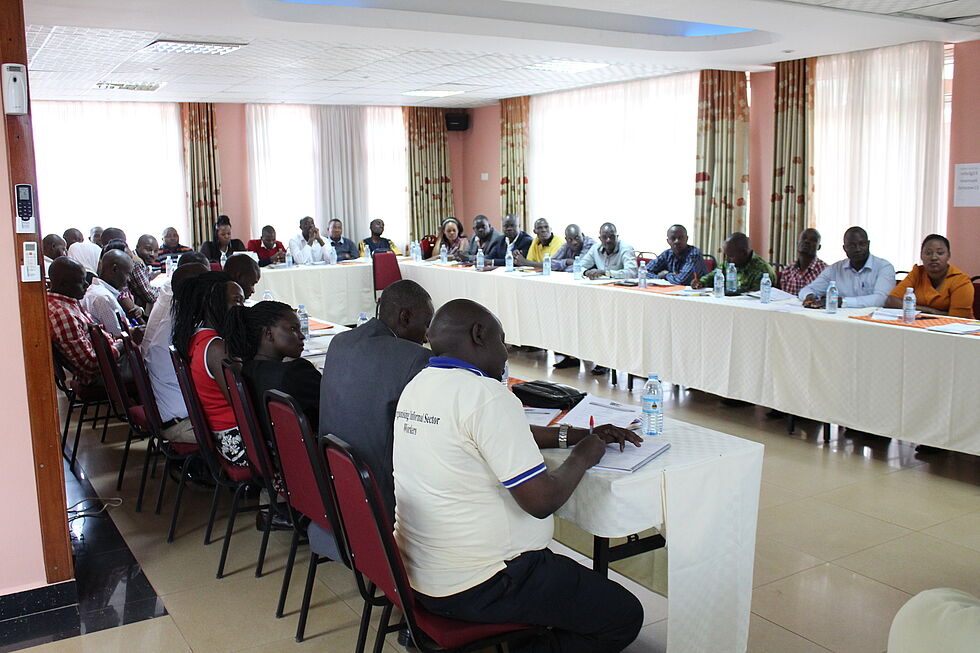 KOTSA an affiliated to ATGWU unites all people working in the taxi business sector in Kampala. The scope in terms of offering transport services covers the entire country. Its members include drivers, conductors, people selling food and beverages in the taxi park or at various stages. KOTSA aims at ensuring the security of the travelling passengers and their property in and around taxi parks and stages as well as sensitizing its members on road safety, discipline and income generations.

The main objectives of the event included but not limited to – understanding the role of the trade unions and informal economy organisations in promoting decent work agenda, the debates and perspectives on rights of women and men in the transport informal economy and developing skills and expertise in organisation and representation of informal workers in the taxi industry.

In his opening remarks, Mr. Abima Stephen, the General Secretary of ATGWU gave background information on the transport sector in Uganda. He mentioned that there are over 974,000 workers in the transport sector throughout Uganda of whom 105,000 people are already ATGWU members. Currently, KOTSA has 36,000 members from the 195 stages that exist within Kampala and they are already benefiting from both ATGWU and KOTSA services. Abima recognised the role of the taxi industry in providing employment to Ugandans and therefore called for promotion of decent work in the sector for example, respecting the fundamental rights of human persons as well as the rights of workers in terms of – conditions of work safety, remuneration.

Mr. Apollo Onzoma, the Principle Labour officer from the Ministry of Gender, Labour and Social Development (MGLSD) that was present at the event, in his remarks called upon KOTSA to think of the best ways of streamlining issues of decent work and better terms and conditions for the members. Apollo highlighted other concerns to be addressed in the taxi sector such as sexual harassment, working hours, pay, overtime and work for longer hours, casualization of labour, occupational diseases and accidents and protection of workers, social protection and security.

At the end of the training workshop, KOTSA members expressed their interest in understanding the national safety and health programmes that they can benefit from to address some of the decent work issues, starting social protection initiatives for themselves and empowerment of women in the taxi industry to increase their visibility and services they can offer.