The public transport sector in Uganda is rapidly changing through liberalisation processes, increasing informality and the entrance of multinational platform companies. In response, the Amalgamated Transport and General Workers’ Union (ATGWU) has started to implement its own digital applications to compete with Uber and other platforms.

Uganda’s Amalgamated Transport and General Workers’ Union (ATGWU) at one time nearly collapsed in terms of membership numbers mainly due to the impact of the Structural Adjustment Programme (SAP) in the 1980s, which led to an »informalisation« of the public transport industry. The entry of public transport multinationals such as Uber and Taxify in Kampala using ride-hailing apps further threatened the livelihoods of informal public transport operators due to stiff competition in the market. These challenges forced the AGTWU to make key strategic choices in order to transform itself. It embarked on an effort to affiliate a mass workers’ association in the informal sector to boost its membership. The union also launched a digital app ride-hailing platform to increase its share of Kampala’s boda boda (motorcycle taxis) and taxi operations amidst stiff competition from the multinationals. As a result, the AGTWU has become a trade union wielding significant power in the Ugandan transport industry (Spooner & Mwanika, 2018). Tackling this new set of challenges once again requires the [re]making of trade union agency (Fichter, 2018).

This study has sought to examine how the AGTWU implemented its revitalisation plan, while reviewing its achievements, the challenges it has experienced and lessons learnt. At the same time, it addresses the following specific questions: how has the ATGWU continued to transform itself into a robust union organisation through mobilisation and by organising informal transport workers and what factors currently exhibit the biggest pull on potential members in the sector in Uganda as well as in other African countries? Why and how has it engaged in the development of digital tools which enable it to compete in the »gig« economy? And in what ways are these processes reconfiguring the union’s ability to act? 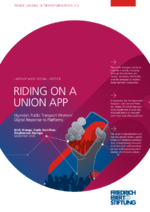 Riding on a union App